For each experiment conducted, including independent replications, report:

10a Summary/descriptive statistics for each experimental group, with a measure of variability where applicable (e.g. mean and SD, or median and range).
10b If applicable, the effect size with a confidence interval.
Explanation
Examples

Summary/descriptive statistics provide a quick and simple description of the data, they communicate quantitative results easily and facilitate visual presentation. For continuous data, these descriptors include a measure of central tendency (e.g. mean, median) and a measure of variability (e.g. quartiles, range, standard deviation) to help readers assess the precision of the data collected. Categorical data can be expressed as counts, frequencies, or proportions.

Report data for all experiments conducted. If a complete experiment is repeated on a different day, or under different conditions, report the results of all repeats, rather than selecting data from representative experiments. Report the exact number of experimental units per group so readers can gauge the reliability of the results (see item 2 – Sample size, and item 3 – Inclusion and exclusion criteria). Present data clearly as text, in tables, or in graphs, to enable information to be evaluated, or extracted for future meta-analyses [1]. Report descriptive statistics with a clearly identified measure of variability for each group. Example 1 shows data summarised as means and standard deviations and, in brackets, ranges. Boxplots are a convenient way to summarise continuous data, plotted as median and interquartile range, as shown in Example 2.

“Bioacoustic parameters of new species of miniaturised cophyline microhylids...Values are presented as mean ± standard deviation, with range in brackets. na = not applicable. *In all species except R. proportionalis calls consist of a single note according to the definition herein, and in these species call duration is therefore synonymous with note duration.” [1]

Effect sizes are often not reported in animal research, but they are relevant to both exploratory and hypothesis-testing studies. An effect size is a quantitative measure that estimates the magnitude of differences between groups, or strength of relationships between variables. It can be used to assess the patterns in the data collected and make inferences about the wider population from which the sample came. The confidence interval for the effect indicates how precisely the effect has been estimated, and tells the reader about the strength of the effect [2]. In studies where statistical power is low, and/or hypothesis-testing is inappropriate, providing the effect size and confidence interval indicates how small or large an effect might really be, so a reader can judge the biological significance of the data [3,4]. Reporting effect sizes with confidence intervals also facilitates extraction of useful data for systematic review and meta-analysis. Where multiple independent studies included in a meta-analysis show quantitatively similar effects, even if each is statistically non-significant, this provides powerful evidence that a relationship is ‘real’, although small. 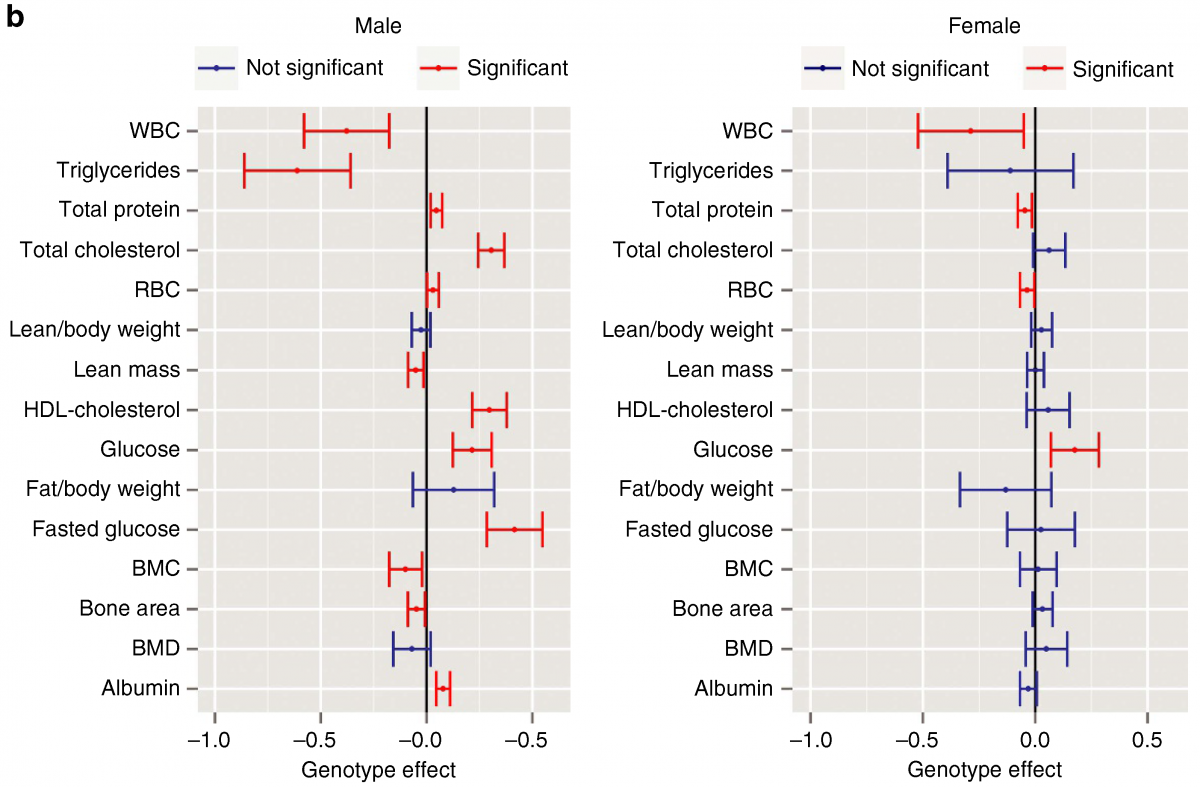 “For all traits identified as having a significant genotype effect for the Usp47tm1b(EUCOMM)Wtsi line (MGI:5605792), a comparison is presented of the standardized genotype effect with 95% confidence interval for each sex with no multiple comparisons correction. Standardization, to allow comparison across variables, was achieved by dividing the genotype estimate by the signal seen in the wildtype population. Shown in red are statistically significant estimates. RBC: red blood cells; BMC: bone mineral content; BMD: bone mineral density; WBC: white blood cells.” [1]